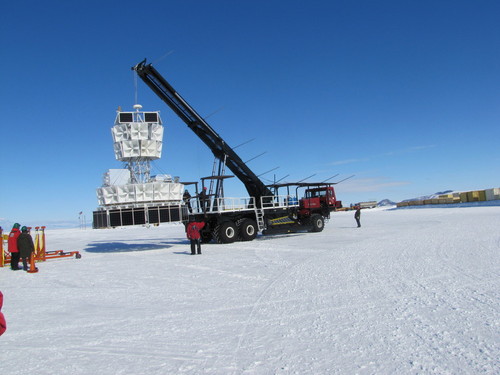 ANITA-IV shortly before flight at the Long-Duration
Balloon Facility near McMurdo Station, Antarctica

Right now, I primarily work with Professor Abigail Vieregg on several experiments seeking to observe, for the first time, some of the most energetic particles in the universe. (ANITA, ARA and the upcoming RNO-G search for radio emissions produced by extremely-high-energy (~EeV) neutrinos interacting in glacial ice. These neutrinos are thought to be produced through interactions of ultra-high energy-cosmic rays (which we do know exist) with the cosmic microwave background (which we also know exists) through the GZK process. A successful observation would help shed light on the origin of ultra-high-energy cosmic rays and provide the highest-energy measurements of neutrino-nucleon cross-sections. I also work on the new BEACON mountain-top radio tau observatory. 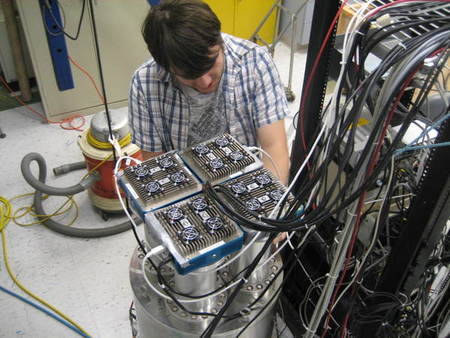 Me fiddling around with one of the DMTPC prototypes

Previously, in graduate school, I worked on developing a detector sensitive to the direction of low-energy (< 100 keV) nuclear recoils (DMTPC). Due to a daily asymmetry in expected dark matter particle trajectories at Earth, such a detector would be able to confirm the astrophysical origin of a putative dark matter signal and also allow probing dark matter cross-sections lower than the coherent neutrino scattering "floor" that could limit future counting experiments. The same technology can be also used for directional fast neutron detection, which is potentially useful for background monitoring or non-proliferation.

As an undergrad, I worked on tracking studies for the SiD detector concept for the now-canceled International Linear Collider.